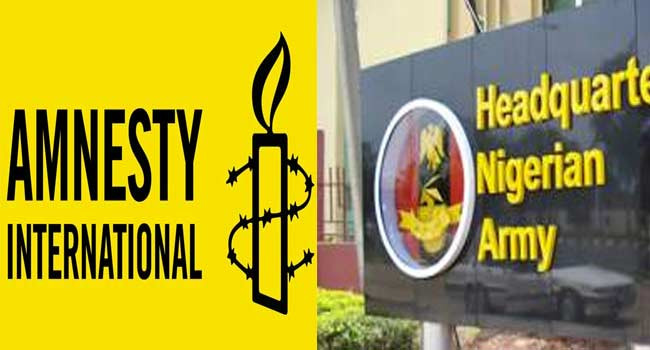 The Defence Headquarters has condemned a recent report released by Amnesty International (AI) on activities of the Nigerian army in the North-East region.  Amnesty International who alleged that troops of the Nigerian army razed down villages and unlawfully detained locals in a rescue operation, were accused of deliberately supporting the acts of terrorism perpetrated against Nigeria by the Boko Haram and the Islamic State of West African State (ISWAP) terror groups.  In a statement released by the Defence Headquarters’ Acting Director Defence Information Brigadier General Onyema Nwachukwu, the non-governmental organization were accused of undermining Nigeria’s Military campaign against terrorism in the North East.  The statement reads;  “The Defence Headquarters (DHQ) has taken cognizance of yet another falsified report by Amnesty International (AI) in a campaign of calumny targeting the Nigerian Military and deliberately supporting the callous acts of terrorism perpetuated by Boko Haram Terrorists (BHTs) and Islamic State of West African Province (ISWAP).“This inglorious campaign is contained in a recent report alleging employment of unlawful tactics of razing down villages and unlawful detention of locals by troops. This is line with the AIs usual mannerism and tenacious efforts aimed at disparaging the Armed Forces of Nigeria (AFN).“The Defence Headquarters wishes to state unambiguously that the allegations being touted by AI are nothing but a betrayal of its lack of in-depth knowledge of the goings-on in the North East (NE) theatre of operation. “It is expedient to state that troops of Operation Lafiya Dole who are conducting Counter Terrorism and Counter Insurgency Operations in the NE do not employ arson as an operational tactic. It is a well-known fact, going by the modus operandi of BHTs, that they have more often than not engaged in the atrocious acts of looting and burning of villages, as well as destroying infrastructures.“It therefore, beats ones imagination that AI is attributing these atrocities to AFN troops who are legitimately defending the country guided by extant rules of engagement and operational codes of conduct.“AI must understand the fact that Nigeria is at war against terrorism in the NE and that the troops have a constitutional mandate to protect lives and property, even if it means conducting an evacuation to save and secure lives of civilians in the conflict. Protecting civilians by evacuating them from the line of fire during combat is not a violation of the international law of conflict or a war crime.“It is rather a commendable effort by the troops to prevent collateral damage during combat. Our troops should therefore be commended for making deliberate efforts to evacuate civilians in order to protect their lives and property.“It is also crucial to point out, that troops deployed to fight terrorism in the NE do not attack or raze down villages, communities or settlements, rather they launch offensive on terrorists’ camps, enclaves and hide outs.“Based on actionable intelligence, persons who provide logistics and other forms of support to the terrorists are arrested and subjected to thorough investigation by a combined team of professionals drawn from the intelligence community of the Armed Forces and other security agencies. Anyone not found culpable is not held in custody for further investigations.“AI must therefore put an end to its reckless distortion of facts in its desperate bid to satisfy its puppeteers by undermining Nigeria’s Military campaign against terrorism in the NE.“We urge members of the public to please discountenance AIs report, as it is not a true and realistic reflection of troops’ counter terrorism operation in the NE”The post Amnesty International is working for Boko Haram and ISWAP – Defence Headquarters appeared first on Linda Ikeji Blog.

American woman to go to jail over $1,500 fake marriage with a Nigeria man