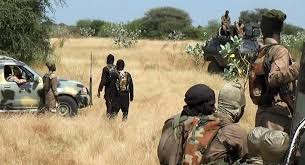 The Nigerian Army has confirmed that 3 soldiers died in the attack launched by Boko Haram insurgents on troops of 25 Task Force Brigade (Army Super Camp 2) in Damboa, Borno State, on Wednesday March 4.  Nigerian Army Operations Media Coordinator, Colonel Aminu Iliyasu confirmed the casaulties they suffered in the attack in a statement he released but also revealed that 19 insurgents were killed.  Iliyasu said the troops recovered five AK-47 rifles, one General Purpose Machine gun and one rocket-propelled gun tube from the terrorists who escaped with various degrees of gunshot wounds. The statement read in parts;   “A misguided attempt by some criminal Boko Haram elements to attack the troops of 25 Task Force Brigade at Army Super Camp 2 in Damboa met a crushing defeat in the hands of the troops. The criminals mounted on gun trucks and with a number of their foot soldiers attempted to infiltrate the troops’ location from three different fronts in the early hours of Wednesday. “Regrettably, three soldiers paid the supreme price while four others were wounded in action. However, the injured soldiers have been evacuated to a military medical facility for immediate and effective management.”The post Army confirms 3 soldiers were killed by Boko Haram insurgents in Damboa attack appeared first on Linda Ikeji Blog.