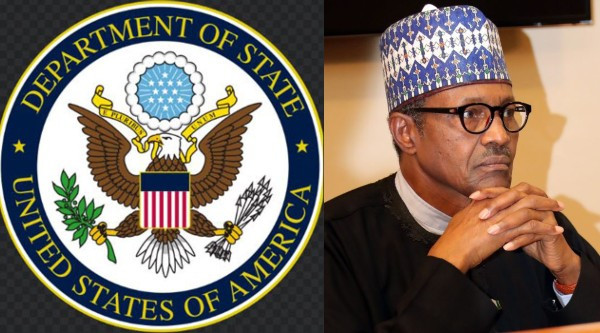 The United States government has claimed that there is sufficient evidence to support allegation of operatives of the Nigerian army and Department of State Services intimidating voters, electoral officials and election observers during 2019 general election.  In its 2019 country reports on human rights practices, the US Department of State insisted that the 2019 election which did not encourage enough voter participation was marred by violence and other irregularities, particularly in the Southern part of the country.  The report partly read;  “There was evidence military and security services intimidated voters, electoral officials, and election observers. In addition violence in several states contributed to lower voter participation and added to the sentiment the army is a tool of the ruling party in many parts of the country, particularly in the South.“For example, widespread violence and military involvement in electoral processes, including during the vote collation process, significantly scarred the governorship election in Rivers State. Additionally several of INEC’s resident electoral commissioners (RECs) reported DSS operatives intimidated them when the RECs attempted to protect voting materials.“Some RECs reported security service personnel visited them multiple times prior to the elections. Press reported certain RECs claimed the DSS was surveilling the RECs and that they had been brought to DSS offices for questioning.” The 46-page report which further claimed that vote-buying were historically high during the 2018-19 electoral season especially in Kano and Osun State, stated that the Nigerian judiciary is still susceptible to intimidation by the executive and the legislative arms of government. It further stated that the corruption in the judiciary backed with the poor pay judicial officers get, has hindered the third arm of government from functioning independently. The US Department of State also averred that judges are easily bribed in Nigeria and litigants cannot rely on the courts to render impartial judgments. It added;  “Although the constitution and law provide for an independent judiciary, the judicial branch remained susceptible to pressure from the executive and legislative branches. Political leaders influenced the judiciary, particularly at the state and local levels.“Understaffing, underfunding, inefficiency, and corruption prevented the judiciary from functioning adequately. There are no continuing education requirements for attorneys, and police officers were often assigned to serve as prosecutors. Judges frequently failed to appear for trials. In addition, the salaries of court officials were low, and they often lacked proper equipment and training.“Although the Ministry of Justice implemented strict requirements for education and length of service for judges at the federal and state levels, no requirements or monitoring bodies existed for judges at the local level. This contributed to corruption and the miscarriage of justice in local courts.”The post Theres evidence Army, DSS intimidated voters, electoral officials and election observers during 2019 election US appeared first on Linda Ikeji Blog.