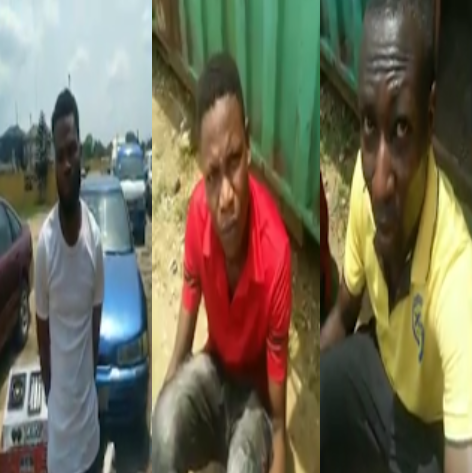 A sales boy identified as Emmanuel has been arrested by the police in Rivers State for allegedly burgling his boss’ shop and carting away goods valued at N1.6M. Security Activist, Amb Bosinde Araikpe, who made the revelation said that that the young man was arrested by the DPO of Ozuogba Police Division, CSP Christian Ugwoke and all the goods recovered. Two other suspects, who bought the stolen goods were also arrested. Sharing a video of the suspects confessing to the crime, Bosinde Araikpe”Sales boy who stole items worth over N1.6M in Ozuogba Area of Rivers confessed to the crime.Be careful who you employ as sales boy or domestic staff, this one robbed & sold everything, but God so kind the DPO of Ozuogba Police Division Rivers State CSP Christian Ugwoke under the Command of CP Mustapha Dandaura upon investigation recovered everything & arrested the handsome sales boy who wanted to settle himself by stealing & selling, his customers were also arrested alongside. May God have mercy on us all.There’s always a lesson to learn from every Crime uncovered, this is simply “you can’t leave your business without close supervision else you will keep running at loss” do business you can supervise Properly.Let’s encourage the Police by appreciating the good Officers efforts.” Watch the video below.      View this post on Instagram           A post shared by Lindaikejiblog (@lindaikejiblogofficial) on Mar 16, 2020 at 2:54am PDTThe post Sales boy burgles boss shop in Rivers State, steals goods worth over N1.6M (video) appeared first on Linda Ikeji Blog.