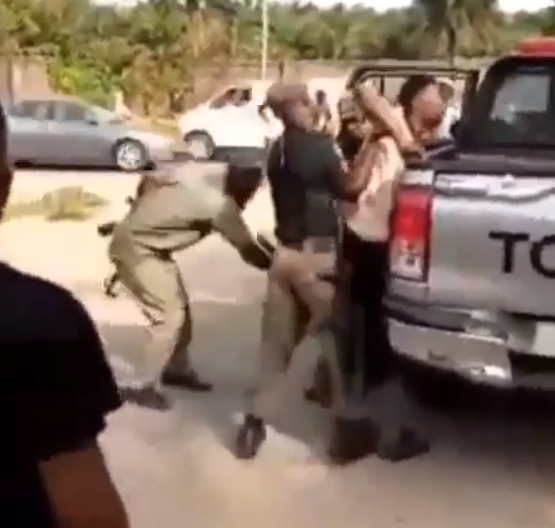 An Instagram user has shared a video of his brother being beaten by police officers. According to @iamnickben, the incident occurred at Sapele-Mosogar bridge stop and search point. He further claimed that his brother was brutalized after he resisted entering the police van after nothing incriminating was found in a bag he submitted for a search.  He wrote;  Nigeria Police man brutalized my younger brother yesterday morning at Sapele-Mosogar bridge stop and search point. My brother bought things for our mom that he was taking to her in Jesse-Town neighbouring village to Sapele, Delta State when they stopped the okada he boarded, asked him what was in his bag, he submitted the bag for search and they found no exhibits.One of the police man who was drunk, asked him to enter their van and he resisted that he hasn’t done anything wrong, he then started to torture him with a heavy wood. After a long torture, people around came and intervened before he was freed, my brother is in pains from the torture. Unknown to my brother someone already videotaped the scene tagged a Sapele base blog and it went viral around Sapele. Police brutality must end in Nigeria, we need justice.      View this post on Instagram         Nigerian man beaten while on his way to visit his motherA post shared by Lindaikejiblog (@lindaikejiblogofficial) on Mar 22, 2020 at 1:41am PDTThe post Nigerian man shares video of his brother being beaten by police officers while on his way to visit his mother in Delta State (video) appeared first on Linda Ikeji Blog.