Update: Police officers caught on camera destroying goods of traders in Lagos have been identified and subjected to disciplinary proceedings 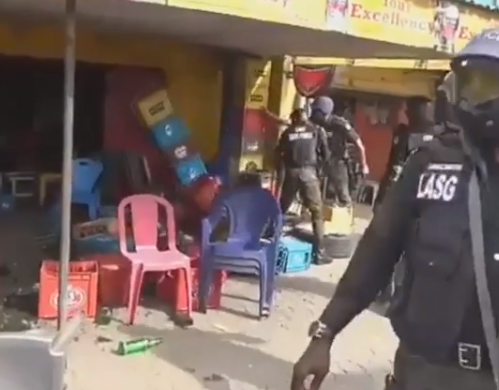 The Lagos state police command has said the police officers who were caught on camera destroying goods of traders on Thursday March 26, for disobeying the directive of the Lagos state government to stay at home due to the Coronavirus pandemic, have been identified, apprehended and subjected to internal disciplinary proceedings. A statement from the spokesperson of the command, Bala Elkana, said the Commissioner of Police Lagos State Command, CP Hakeem Odumosu, was saddened by the apparent unprofessional conduct exhibited by some Police officers identified in a trending video and has ordered for their immediate arrest and investigation. Bala said the officers are currently subjected to internal disciplinary proceedings known as Orderly Room trial at the Provost Department, State Command Headquarters Ikeja, to serve as deterrent to others.Their conduct is totally condemned as it fell short of our professional standards and rules of engagement. ” the statement read The statement adds that police officers involved in the enforcement of restriction orders across the state, have been warned to exercise their discretionary powers with utmost professionalism, compassion and respect for the rights of the citizens.  Bala added that for complaints against Police actions in the State, residents should please call the following numbers 09090003792, 09010512348, 09010512350.  Watch the video of the officers destroying the wares of erring traders below      View this post on Instagram         IGP Adamu Mohammed orders commencement of disciplinary action against policemen spotted in a viral video destroying items in a Lagos shopA post shared by Lindaikejiblog (@lindaikejiblogofficial) on Mar 27, 2020 at 5:50am PDTThe post Update: Police officers caught on camera destroying goods of traders in Lagos have been identified and subjected to disciplinary proceedings appeared first on Linda Ikeji Blog.