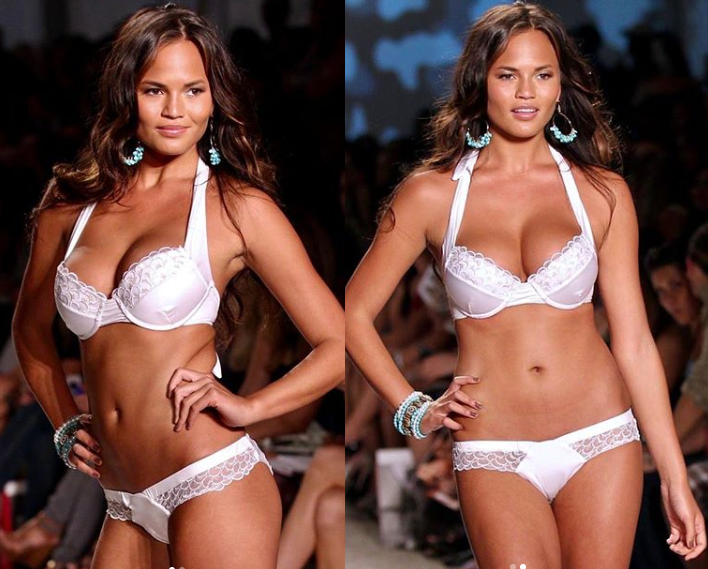 American model, Chrissy Teigen marked 10th anniversary of her breast implants on Monday night, by sharing throwback photos of her showing off her curves on the runway while modeling a white bikini. The mother of two wrote: ‘happy 10 year anniversary to these titties and RIP to these teeth.’       View this post on Instagram         happy 10 year anniversary to these titties and RIP to these teeth. @christopher.petersonA post shared by chrissy teigen (@chrissyteigen) on Mar 30, 2020 at 11:53am PDT Her comment regarding her teeth was about the veneers she had at the time. When comedian Whitney Cummings commented: ‘Wait isn’t ten years when we need to take them out?’ meaning that 10 years is the time that implants traditionally need replacing. In her reply, Chrissy hilariously wrote: ‘@whitneycummings yes dude and I really want them OUT. Quarantine would have been perfect time but apparently, it’s not ‘ESSENTIAL’ smh.’ Earlier the month, she opened up about her regrets getting breast implants.  She told Glamour UK: ‘Yeah, I did my boobs when I was about 20 years old,’ she revealed. ‘It was more for a swimsuit thing. I thought, if I’m going to be posing, laid on my back, I want them to be perky! But then you have babies and they fill up with milk and deflate and now I am screwed.’ ‘I had a quarter ‘teardrop’ cup in the bottom and filled out the breast line. But I want them out now,’ she continued. ‘If I could do one thing, it would be to have a lift.’  The model also admitted that she is aware of the risk now that she is now a mother. ‘When you have kids, you think about [the risks] of surgery and I think, “This is not the way I want to die, in boob surgery.”  Chrissy is mom to 3-year-old Luna, and Miles, one, with husband John Legend. The post ‘Happy 10 year anniversary to these titties’ – Chrissy Teigen marks 10th anniversary of her breast implants with runway photos appeared first on Linda Ikeji Blog.