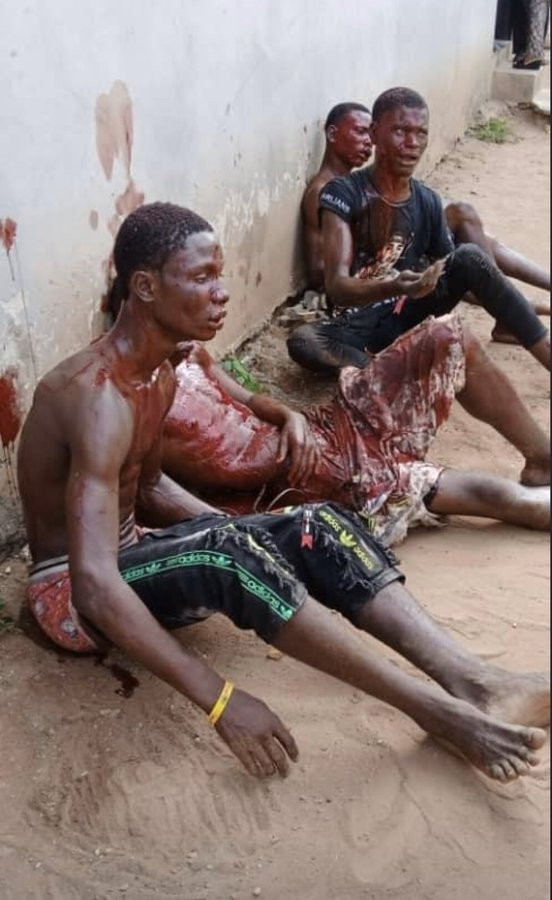 #Lagosunrest is on the top spot of the Nigerian Twitter trends, and it took the prominent position after residents of some communities in Lagos state took to the streets to defend themselves against robbers. 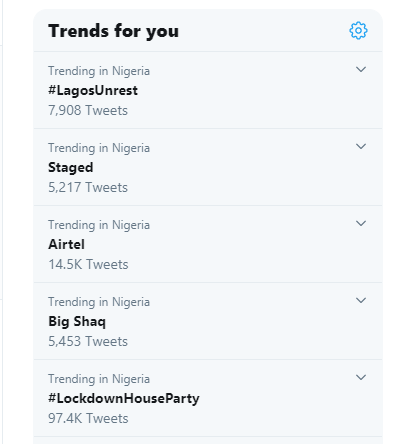 In the last few days, there’s been reports of robbers taking advantage of the lockdown order issued by President Buhari in the wake of the Coronavirus pandemic, to loot shops and also rob some households.  The reoccurring incident has pushed residents into becoming vigilantes, as they also accused the police of portraying a lackadaisical attitude in curbing the escalated crime rate in the state.  Here are some tweets and videos below; 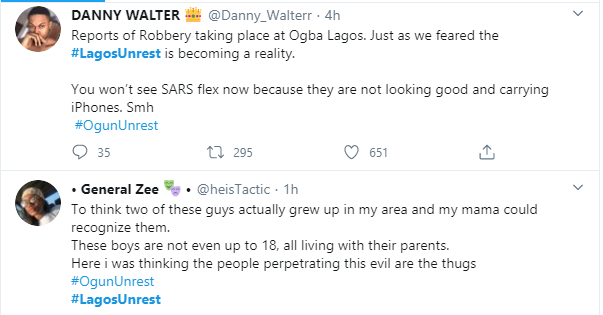 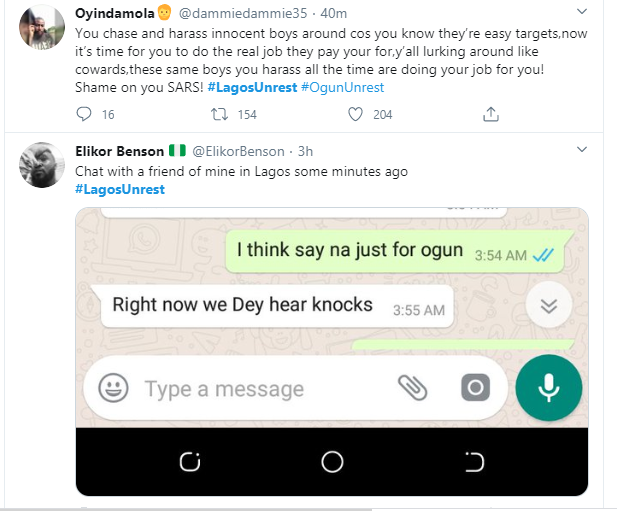 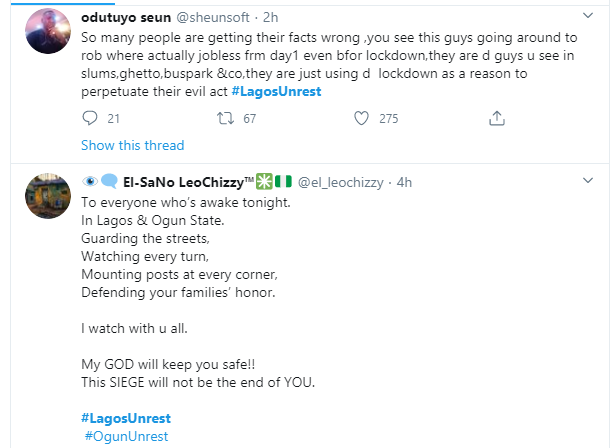 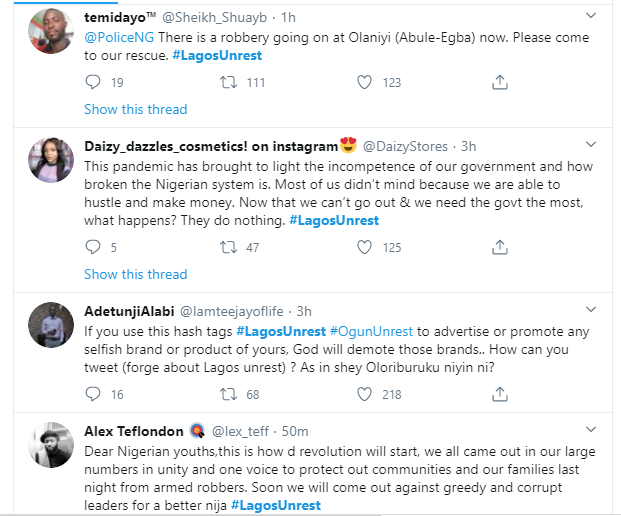 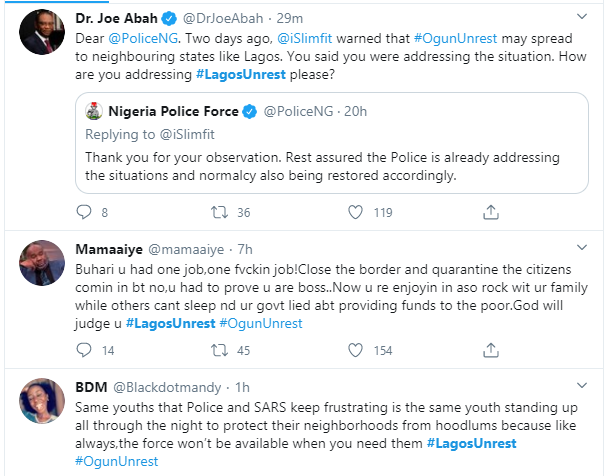 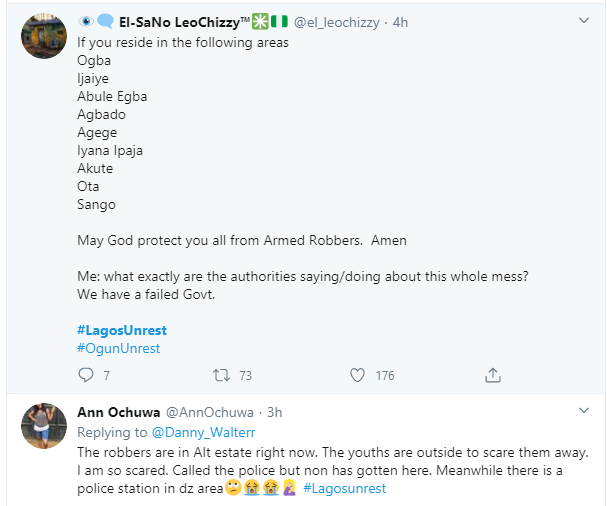 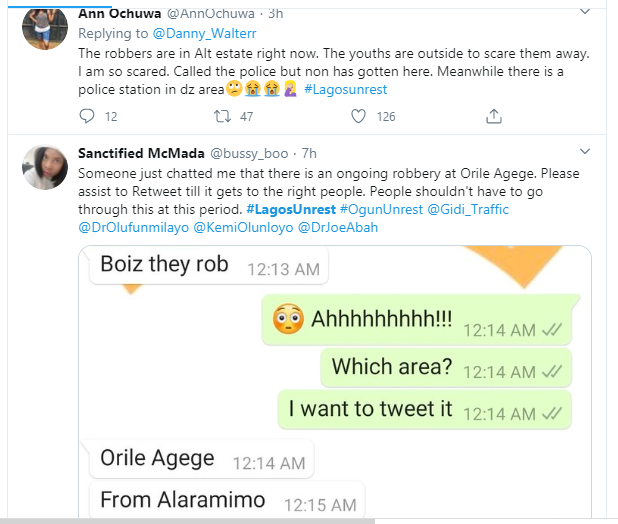 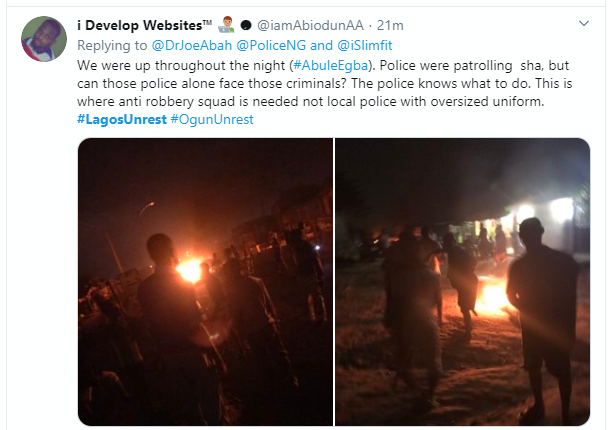 Robbery Reports are coming in from, Alagbado, Agbado, ijaiye, Abule Egba, Agege, Ogba, Akute, Ota, Sango.The residents turned to Vigilante, to secure the area. Are we on our own now? #LagosUnrest #OgunUnrestpic.twitter.com/XHL5ykONqp— DANNY WALTER (@Danny_Walterr) April 12, 2020To think two of these guys actually grew up in my area and my mama could recognize them.These boys are not even up to 18, all living with their parents.Here i was thinking the people perpetrating this evil are the thugs#OgunUnrest#LagosUnrestpic.twitter.com/VxzDIpRmCV— • General Zee • (@heisTactic) April 12, 2020We are securing the area ourselves… over 100 men on standby.. thanks to Nigeria police too @PoliceNG I have seen 6 patrol van moving area the area #abuleegba #LagosUnrest .. I rep Clem Road… Agbado area pic.twitter.com/iBjYaEder6— Tolulope Alli (@2tolu) April 12, 2020they’re saying “come outside, they’re already in the vicinity” “come outside don’t let them attack you in your homes” this is really serious @PoliceNG please! #LagosUnrest #OgunUnrest pic.twitter.com/flLHBX7B8x— #onenigerianatatime (@Stee_vane) April 12, 2020Such courageous and fine reporting from this brilliant journalist @AnetaFelix See how residents came out to protect their communities.#LagosUnrest #AgbuleEgba #COVID19 #OgunUnrestMore pic.twitter.com/xFDfjHAuqT— Miz Philz (@miz_philz) April 12, 2020We pray they don’t show up again after all this overnight wahala #Alimosho#Vigilante #LagosUnrest pic.twitter.com/J3lPzknTc5— Lagos_MD (@EdikanPaulinus2) April 12, 2020The post #Lagosunrest trends as residents of Lagos take to the street defend themselves against robbers amid lockdown over Coronavirus (videos/photos) appeared first on Linda Ikeji Blog.