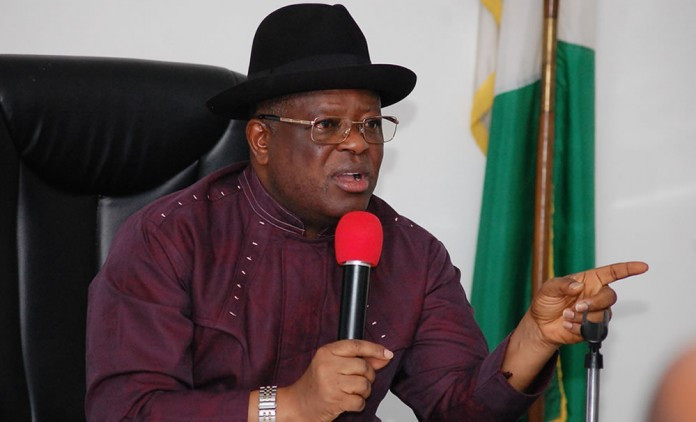 State correspondents of The Sun newspaper, Chijioke Agwu, and the Vanguard newspaper, Peter Okutu have been banned from entering Ebonyi State Government House or any government facility in the state, following their report about some alleged incidents which occurred in the state.  While Mr Agwu was arrested over a report he did on Lassa Fever outbreak in the state, Mr Okutu was arrested on the orders of Ohaukwu LGA Chairman Clement Odah, over a report he did on the alleged military invasion of Umuogodoakpu-Ngbo community in the council area. Umahi made the announcement in a statewide broadcast and he expressed dissatisfaction with the leadership of Nigeria Union of Journalists (NUJ), for failing to ”discipline their members.” Though the journalists have been released, Umahi who said he can no longer guarantee their safety as the people of the state are angry with them for creating panic.  Governor Umahi said;  “If you think you have the pen, we have the koboko. I want to say that I am very displeased with the president and leadership of the Nigeria Union of Journalists and I am going to seize their allowances for two months because they have failed to discipline their members.“Ebonyi State is no longer a dumping ground. Only the other day, Chijioke Agwu (referring to The Sun Correspondent) wrote that Lassa Fever is killing Ebonyi people in droves and (a) few days back, Mr Peter Okutu of Vanguard did his own.“Okutu is fond of degrading Ebonyi State, and I don’t know why my officials have allowed him to continue to do that, because he is not from Ebonyi State. I want to ban him for life with Chijioke Agwu. I don’t want to see them anywhere in any Government facility.“We are not begging you to give us good report, because the only person that gives good or bad report is God. We are all accountable to him. If you think that Ebonyi State is a dumping ground, try it again.“If you think you have the pen, we have the koboko. Let’s leave the court alone. Ebonyi people are very angry with the press and let me warn that I won’t be able to control them or know when they unleash mayhem on you, if you continue to write to create panic in the state.“I want you to write it that way, that I said, press in Ebonyi is trying to create another COVID that is more dangerous and that is to create panic in our people.“The other one wrote that cholera has killed 20 people in Ohaukwu. If you try it again, I may not know when Ebonyians may react. This is important for the NUJ to know.“If you are an Ebonyi man or live in Ebonyi and you don’t feel our pains, it is a shame on you. Maybe, the press people claim they are untouchable. I have reported to the National President of NUJ, I have reported to (the) State leadership of NUJ and I have reported to the public. Now, the die is cast. May God save us, in this time.” The post If you think you have the pen, we have the koboko – Governor Umahi says as he bans two journalists for life from state functions appeared first on Linda Ikeji Blog.