Nnamdi Kanu addresses his followers on Facebook live, says President Buhari is not the one in Aso Rock (video) 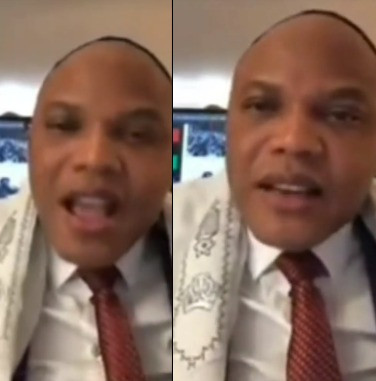 Nnamdi Kanu, leader of proscribed secessionist group, Indigenous People of Biafra IPOB, addressed his followers on Facebook live on Wednesday, April 29. Kanu who fled Nigeria in Septemver 2018 after the military invaded his home in Abia, is still insisting that President Buhari is not the one currently presiding over the affairs of the nation in Aso Rock. According to him, the man currently presiding over Nigeria is named “Jubril ,” a clone of President Buhari. He said Jubril is now bleaching his skin so he can be as light skinned as Pastor Chris Oyakhilome of Christ Embassy.Kanu also alleged that first lady Aisha Buhari is now the one in charge of Aso Rock. He also responded to late Abba Kyari’s daughter, Aisha, who asked people who have accused her father of causing the troubles in Nigeria, to allow those that love him to mourn and grieve him.  Watch a short clip from his live session below. The post Nnamdi Kanu addresses his followers on Facebook live, says President Buhari is not the one in Aso Rock (video) appeared first on Linda Ikeji Blog.