Jigawa state government confirms mysterious deaths of 92 persons within one week in a local govt area. Rules out COVID19 complications 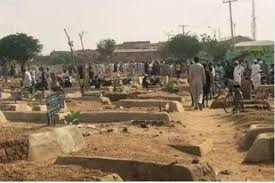 The committee constituted by the Jigawa state government to investigate the mysterious deaths in Hadejia local government area in the state, says investigation so far has shown that 92 bodies were buried in the two cemeteries in the area in just one week. Two days ago, there were fears in the state after it was reported that persons who are over the age of fifty, have died in one week.  Chairman of the state’s investigation committee, Dr Abdulwahab Mohammed. who spoke to newsmen today May 7, said only one of the deceased had symptoms of COVID19. ”We went to Hadejia together with WHO and NCDC to find out what exactly was happening. We collected three sets of data. We collected data from the hospitals over a week period indicating how many people have died. We found out that there were a total of 44 deaths in the General hospital from on the 28th of April to 5th of May. That was the data from the hospital. We also went to the community. We were able to do community survey and find out the total number of death. We discovered that there were 46 deaths within that same period. We now said there is no data evidence of deaths than the graves where these people were buried. There are only two cemeteries in the community. We went there and with the assistance of the undertakers, we were able to count the number of graves that were made over that one week and we discovered that there were 92 graves. None of them had history of travel to any state where there are cases of COVID and none of them also had history of contact with anyone that was suspected or confirmed to be having COVID.  70% of the deceased had pre-existing illnesses like Diabetes, dementia, Chronic kidney disease. It is only one of them that had symptoms that were suggesting of COVID19” he said  The post Jigawa state government confirms mysterious deaths of 92 persons within one week in a local govt area. Rules out COVID19 complications appeared first on Linda Ikeji Blog.