Doctors and nurse held hostage by Coronavirus patients in Kano 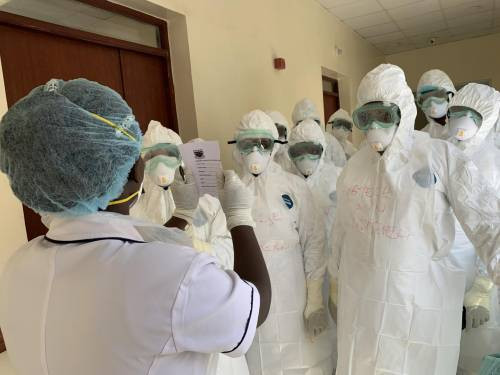 Two doctors and a nurse were reportedly held Hostage yesterday May 7, by Coronavirus patients at Kwanar Dawakin isolation center in Kano.  Former Chairman of Nigerian Medical Association in Kano, Prof. Aminu Mohammed confirmed the incident in an interview with Wazobia FM’s “make una wake up show” this morning.  He said the fully kitted health workers were on a ward round when they were locked in by the Coronavirus patients for hours. Mohammed said the doctors were almost suffocating before they managed to break down the door and forced their way out of the ward.  One of the patients who confirmed the incident, said they were protesting against the delayed testing and confirmation of their status within the stipulated 7 days period of being on drugs. He however insisted that the health workers did not break down the door, but were allowed to go following the intervention of the leader of the health workers at the center.   The post Doctors and nurse held hostage by Coronavirus patients in Kano appeared first on Linda Ikeji Blog.