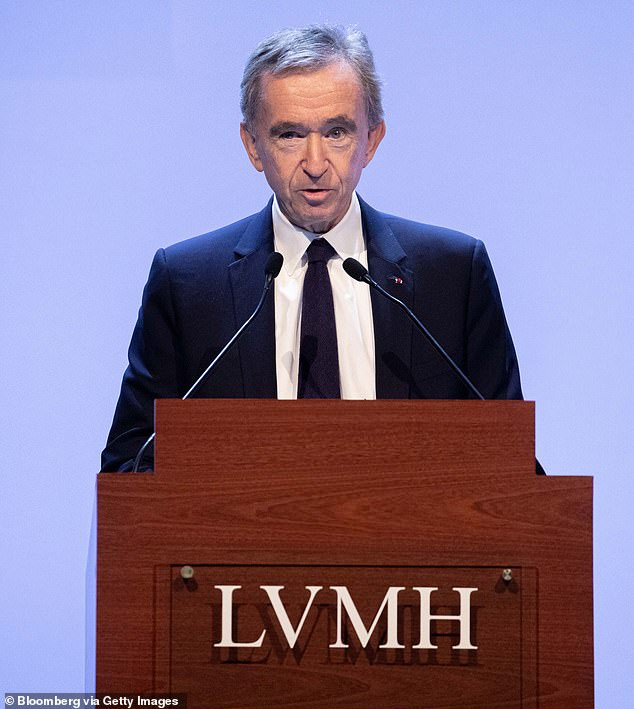 Bernard Arnault, the richest man in Europe and third-richest billionaire worldwide, has lost an astonishing $30billion during the Coronavirus pandemic more than any other person in the world. The Frenchman, 71,  is the chairman and CEO of the prestigious luxury empire LVMH Moët Hennessy and oversees a portfolio of 70 luxury brands, including Louis Vuitton and Sephora.  While the economy is struggling globally due to the Coronavirus pandemic, LVMH shares has plummeted by 19% in a year, Bloomberg reported. It means Arnault’s net worth has plunged by a staggering $30billion, as calculated by the Bloomberg Billionaires Index.  It was also reported that he has lost more than any other individual in the world.  As of May 6, the businessman had lost as much money as Jeff Bezos, chairman of Amazon.com Inc has gained, the news site reported.    The father of five is currently worth $77billion according to the Index, which is updated daily. Arnault is also due to pay out $16billion after striking a deal in November last year for the jewellery group Tiffany & Co, Bloomberg added, which is believed to be the largest luxury acquisition ever. LVMH plans to slash its capital expenditure by up to 35%, which will postpone some store openings and renovations, Bloomberg said. Arnault and four other executives were also reported to forego their April and May salaries in light of the pandemic.  Despite this, both LVHM officials and industry experts have said they are confident the ‘highly-successful risk taker’ businessman will weather the storm. Jean-Jacques Guiony, LVMH’s chief financial officer, said: ‘We are very much long-term oriented. In a crisis a lot of people say things will never be the same, but we are still confident.’ Former LVMH chairman Pauline Brown told Bloomberg: ‘You could divide the world’s top billionaires into highly successful risk managers and highly successful risk-takers; Arnault is a highly successful risk-taker.’ ‘When he feels momentum and long-term potential, he uses the resources he has to go after it aggressively.’ The post Europe’s wealthiest man, Bernard Arnault has lost $30BILLION during Coronavirus crisis appeared first on Linda Ikeji Blog.