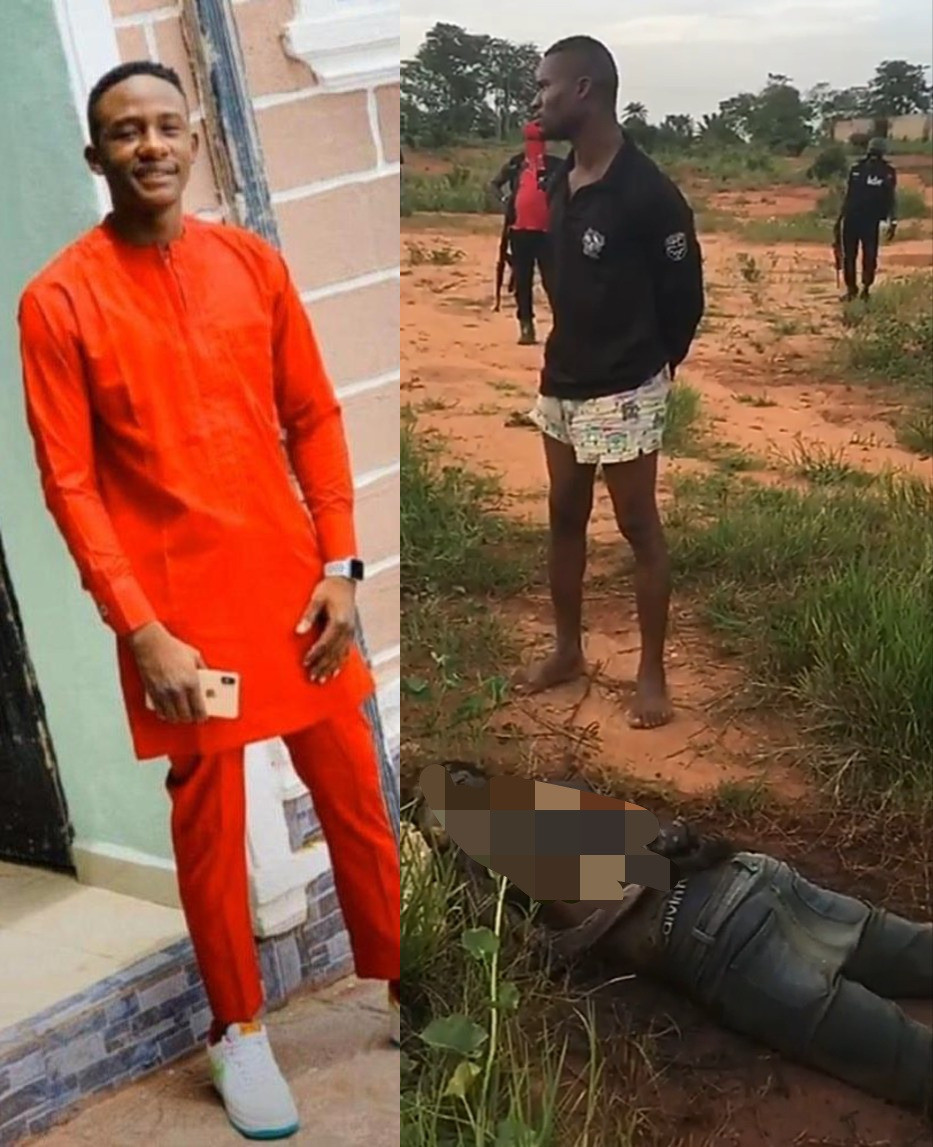 Youths in Owerri, Imo State, are currently protesting after a 21-year-old man, known as Leo Micah and popularly called Leo Wire, was kidnapped last week in Imo allegedly by men in military uniforms and taken to Anambra State, where he was killed. Leo’s dead body was recovered in a bush in Anambra days later. He had his hands cuffed behind him and he was wearing only a pair of jeans. His body was decaying already. Also a heavy stone, which one of the suspects confessed was the object used in killing him, was found near his body. According to reports, a group of men in military uniforms, claiming to be soldiers, had arrested Leo and accused him of being a “Yahoo boy”. They forced him into “unidentified cars without plate numbers” and drove him along with his car to Anambra, where they held him hostage and demanded N4million as ransom. His abductors contacted his younger brother to pay the ransome but he couldn’t afford it as he had just buried their mother – a burial Leo didn’t attend because he had been kidnapped. When the men didn’t receive the ransom, they emptied Leo’s account and killed him.  A source who spoke to LIB said one of the suspects was caught while making plans to sell Leo’s Lexus-350 SUV.  Word of Leo’s death got to his family and they informed the SARS division in Owerri, who then took action and tracked his phone, his car, and the bank account the money was transferred into. One of the kidnappers was caught in the process and he took the SARS operatives to the bush where Leo’s body was dumped. The kidnapper, who had on a Nigerian military sweater, confessed to the crime. He said he was once a soldier and was dismissed in 2018. He went on to name his accomplices, one of whom he says is a soldier. He confessed that they accused Leo of being a fraudster before they arrested him. He added that he and his accomplices used a huge stone to kill Leo and thereafter poured a substance on him. The suspect said: “We arrested him in the name that he’s a Yahoo boy. So, we collected his car. Emmanuel and Ifeanyi Nwiwu used this stone to kill him. Emmanuel, the one who is… and Ifeanyi who is a soldier in Makurdi, used this stone to kill this man.” “You were once a soldier, abi?” one of the SARS officers asked the suspect. He responded: “Yes, I was once a soldier. I was dismissed in 2018.” A friend of Leo’s, who spoke to LIB, said it has become a common practice in the state for men in uniforms to arrest young men who own cars, and accuse them of “Yahoo Yahoo”, before leading them away in unmarked cars just to extort them. He said: “In owerri is has become a norm for police and sars and armed people to go around in buses or sienna without plate number to harrass young boys, especially the ones with cars. They unlawfully arrest and detain you and tag you a criminal until you pay huge amounts of money. “So now, this ex military man and his crew, they use the same tactics the police would use; unidentified cars without plate numbers. They unlawfully held Leo. “Usually when they arrest you, they will push you into thier vehicle. They wont allow you drive in yours. So, they carried this boy, seized his phones, cleared his account of all the money there and drove all the way to Anambra to kill him. Took his belongings. It is said in the process of going to sell the car they were caught.” 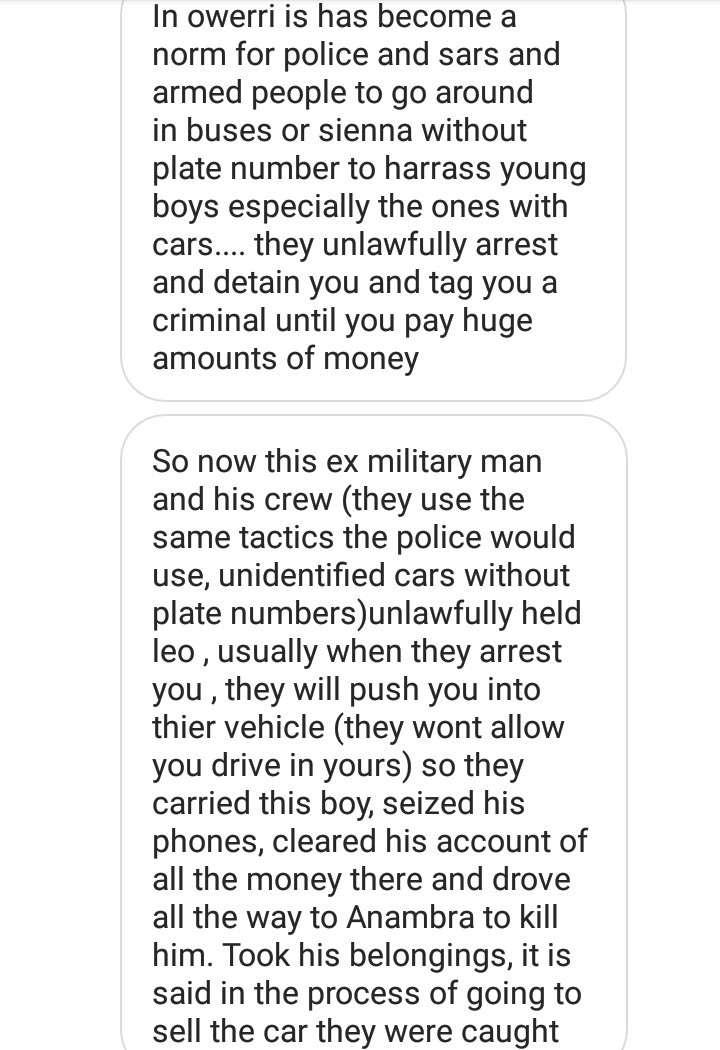 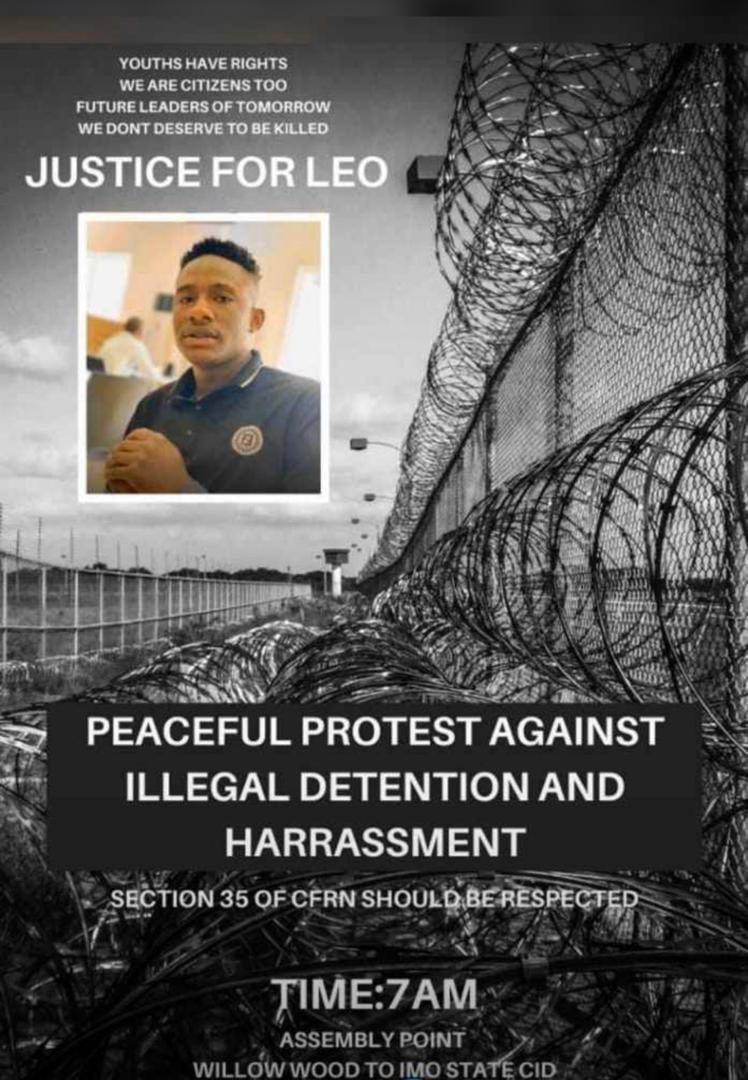 Loved ones have taken to social media to trend the hashtag #JusticeForLeo. Also, friends and family have taken to the streets of Imo to protest his killing while demanding that the remaining culprits be brought to justice. Below is a video of the soldier confessing and also clip from today’s protest. The post Ex-soldier narrates how he and other uniformed men kidnapped and murdered a 21-year-old man in Imo (graphic video) appeared first on Linda Ikeji Blog.