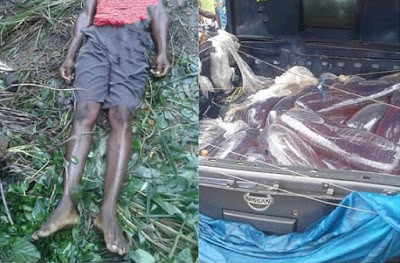 A 27-year-old man identified as Chinedu Nwedu was crushed to death on Sunday May 10, by a vehicle conveying two policemen in Eziorsu community in Oguta council of Imo State. The incident occurred while the policemen who were led by one Sergeant Ikiira Sunday from Mopol 29 in Awka, Anambra State were hurriedly getting away from the scene of a breached pipeline.  The policemen who were accosted by military men at Egbema as well as community youths, reportedly engaged the soldiers in a gun battle while trying to escape after a successful operation at the pipeline.  The Nation reported that Nwedu was knocked down when the policemen zoomed off in their vehicle after being overpowered by the military men. They’ve now been taken into custody.  Imo state’s Police spokeperson Orlando Ikeokwu confirmed the incident but described it as an “accident”.   The post Fleeing policemen crush man to death in Imo appeared first on Linda Ikeji Blog.