I don’t have the power to take Cynthia Morgan’s name, it was given to her by her parents – Jude Okoye shares his own side of the story (video) 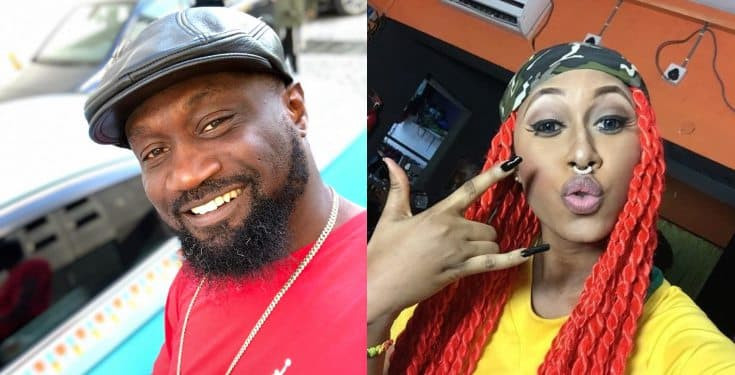 Jude Okoye has finally reacted to his former record label act, Cynthia Morgan’s claim of losing all she had including her name, VEVO account, Instagram account and royalties after they had some issues centered on her contract.  In an Instalive chat with Tunde Ednut, the music executive averred that he doesn’t have the right to take Cynthia Morgan’s name because it is her birth name. He also disclosed that the dancehall artiste who has been free since 2017, changed her name to ‘Madrina’ while still signed to his record label.  Recalling a conversation they had, Jude Okoye said Cynthia wanted to change her stage name to ‘Madrina’ to mean ‘God mother of entertainment industry’, but he advised her to use it as a nickname since her brand was built around Cynthia Morgan.  Though he denied taking over her Instagram and Twitter account, Jude Okoye admitted that he took over her VEVO account. According to him, this was to recoup over N40m he spent on her.  He also revealed that he paid Cynthia Morgan’s house rent, bought her a Range Rover and even gave her money to buy a land for her mother in Benin.  Jude Okoye added that the dancehall star burned all the bridges he built for her and once questioned his value in her life. He said;  I don’t understand, if she has a contract where it is stated like that, she should bring it so we can see. The one I have here is not different.How can I hold her name, which court can grant it?You want to do things on your own because you think you can do things on your own, then you failed and you want to put the blame on me.Two years after you left the label, your social media accounts are still yours, you are still going on shows behind me and you still want to blame me for your failure. If you put the blame on me, would that make you rise again?I have never for once told CYNTHIA MORGAN that she cannot use her name. I had no power to take that name, it is physically impossible to do that. “Did I chase her with a court injunction? No.What exactly did I do wrong? I shouldn’t have let you go when I left? Your contract hasn’t expired and you left. I let you go.Before she left, she wanted to change her name to Madrina says it means ‘Godmother. I advised against.I shot 13 videos, each worth N3M. If I have not made my N40 M, why the fuck should I allow you go? How will I get back my money?      View this post on Instagram         Jude Okoye shares his own side of the story. He denied taking over her Instagram and Twitter account, but admitted taking over her VEVO account to recoup the money he spent on herA post shared by Lindaikejiblog (@lindaikejiblogofficial) on May 24, 2020 at 2:00pm PDTThe post I don’t have the power to take Cynthia Morgan’s name, it was given to her by her parents – Jude Okoye shares his own side of the story (video) appeared first on Linda Ikeji Blog.