”Your disrespect for women is legendary”- Abike Dabiri-Erewa fires back at Minister of Communications and Digital Economy, Isa Pantami 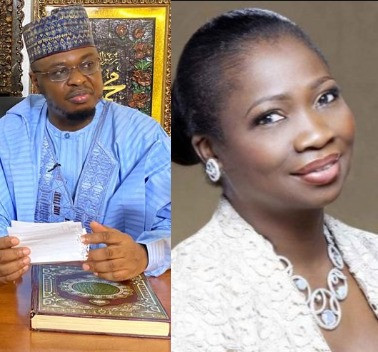 Abike Dabiri-Erewa, chairman of the Nigerians in Diaspora Commission NIDCOM, has replied Isa Pantami, Minister of Communications and Digital Economy, who denied her claim that he sent armed men to chase members of the Commission from an office given to them by the Nigerian Communications Commission NCC. Dabiri-Erewa in an interview with SaharaReporters, accused the Minister of sending gunmen to take over her office in February. The Minister in a swift reaction via his Twitter handle, denied the allegation, saying it is a fat lie from her. Read here. She has since taken to her Twitter handle to reply Pantami. Dabiri told the Minister who is an Islamic scholar ”not to lie.” According to her, his disrespect for women is legendary.”An Islamic scholar should not lie Hon Minister .( Phd)You did that to me cos I am a woman .Your disrespect for women is legendary Left the ugly incident behind me since Feb. But pls release all our office eguipment.Public office is transient .@DrIsaPantami” she tweeted She also shared a video showing the morning when the office was taken over on the alleged order of the Minister.  @DrIsaPantami . To refresh you Sir. Despite your denial.The Sec of the Commission seeking for calm .after Staff resumed for work and denied access to the 5th floor office of Nidcom.. Based on your instruction . Turned back by armed men. Haba!!!! pic.twitter.com/QGiIojMqyz— Abike Dabiri-Erewa (@abikedabiri) May 24, 2020The post ”Your disrespect for women is legendary”- Abike Dabiri-Erewa fires back at Minister of Communications and Digital Economy, Isa Pantami appeared first on Linda Ikeji Blog.