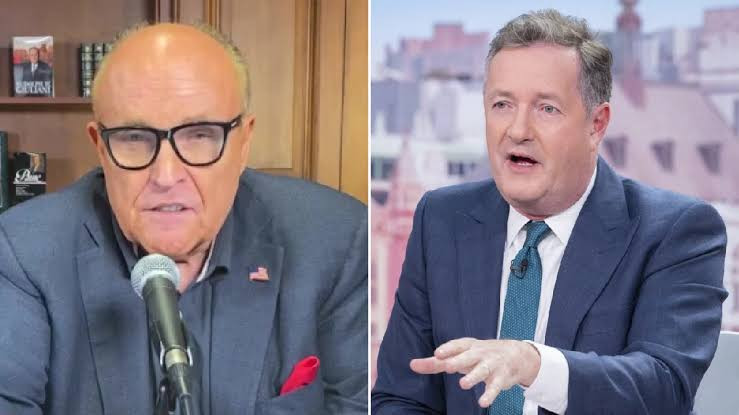 British journalist Piers Morgan and US president Donald Trump’s personal lawyer, Rudy Giuliani on Thursday morning swore at each other in an explosive clash live on air. Giuliani was appearing on the ITV’s Goodmorning Britain TV show to discuss the ongoing racial tension across the US following the death of George Floyd last week, which sparked Black Lives Matter protests across the US and the world.Piers Morgan was a friend to Trump until he started criticizing Trump over his handling of the Coronavirus pandemic, leading Trump to unfollow Piers on Twitter. After a friendly start during the Thursday interview, things turned sour when Piers questioned Rudy Giuliani over an inflammatory tweet Donald Trump posted last week about the protests in the US where Trump wrote ‘when the looting starts the shooting starts’. Explaining that the words were a quote from a racist 1960s police chief before he set “guns and dogs” on young black men, Piers said to Rudy: “He should never have said it and you should be big enough to admit he shouldn’t have said it.” However, Guiliani a staunch Trump ally said: “You have misinterpreted him on purpose – it was an accurate warning and it actually happened – people have been killed.” Giuliani said that Trump “doesn’t have a racist bone in his body”. Piers hit back, saying: “I quoted him from his own tweet, what are you talking about?”I don’t care if he knew [where the quote came from] or not, why the hell is he using such inflammatory language?” Giuliani replied: “I happen to be in favour of truth and justice.” Piers then said Trump’s lawyer sounded “completely barking mad” adding “you’ve lost the plot.” The exchange then became personal, as Guiliani and Piers’ went off script and started exchanging personal insults towards each other. Giuliani insulted Morgan’s career in US which ended when he was sacked by CNN. Gulliani blasted Morgan: “Everyone in America knows you’re a failed journalist.””I know what happened to your show, Piers, and I remember the mistakes you made, and I remember that you s***ed up.”You can say anything you want about me, you are trying to create violence in the country.” Giuliani also slammed Piers and his co-host Susanna Reid for having him stay awake until 1am for the video call. Piers and Susanna quickly apologised to the viewers for Giuliani’s use of ‘profanity’ – only for the former New York Mayor to insist that he had not sworn.He said: “Now you’re lying again, I didn’t use profanity.”That’s exactly what you do to President Trump.” Susanna then asked Gulliani to clarify what he said, Giuliani refused and continued attacking Piers while Piers rattled back.Piers told him: “I had the stomach to stand up and say that your gun culture is completely out of control and unacceptable.”You’ve come on here, you’ve been rude and abusive. You sound unhinged, you’re somebody I used to admire.” Rudy Gulliani’s video link then cut off. Watch the video below.       View this post on Instagram         Trump’s lawyer Rudy Guliani blast each other on live TV broadcastA post shared by Lindaikejiblog (@lindaikejiblogofficial) on Jun 4, 2020 at 4:05am PDTThe post ‘You’ve gone completely mad’ ‘You’re a failed journalist’ – Watch Piers Morgan and Trump’s lawyer Rudy Guliani blast each other on live TV broadcast (video) appeared first on Linda Ikeji Blog.