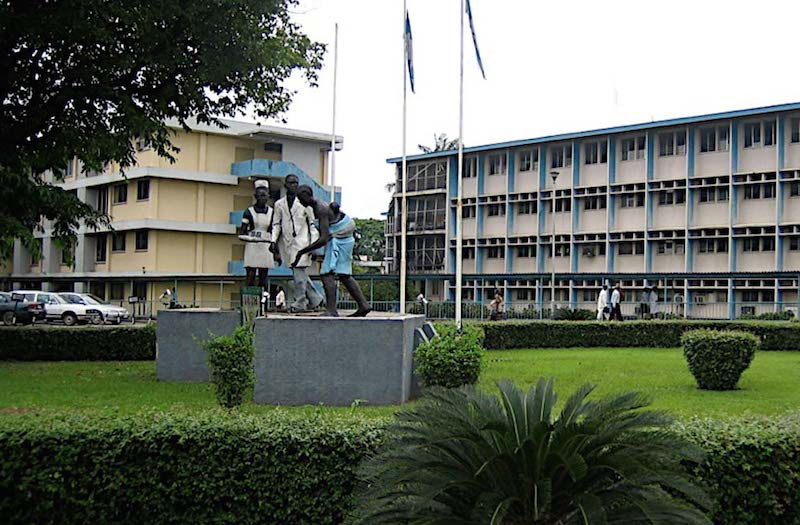 The management of the Lagos University Teaching Hospital (LUTH) has denied claims made by a Twitter user that staff of the hospital refused to treat an 18-year-old salesgirl, who was on Thursday, June 3, allegedly raped by a dispatch rider. Recall that on Thursday, June 4, LIB shared the story of a business owner who took to Twitter to accuse the police and LUTH of perverting the course of justice after her 18-year-old sales girl was raped by a dispatch rider.  Temitope Bukola of House Sisi said her sales girl was raped by a dispatch rider who arrived to pick up a delivery. She added that she has been trying to get justice for her sales girl but the policewomen she reported to at two different police stations only mocked the girl. She also claimed that LUTH staff refused to treat the girl unless they drop the rape charges. 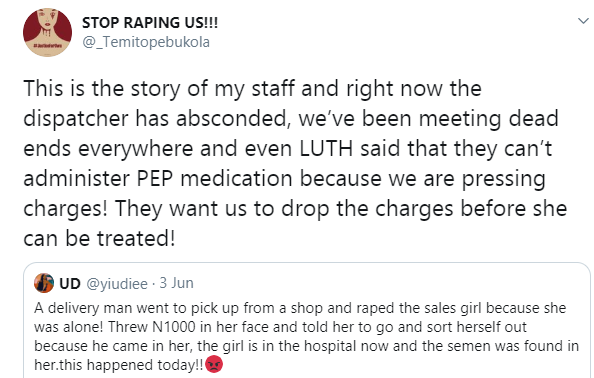 LUTH has however denied the allegation. In a statement released on Saturday, June 6, the hospital management said the woman wasn’t told to drop charges against the suspect before she would be attended to. Read the statement from the hospital detailing their own account of what transpired between Temitope Bukola and the hospital staff below. “LUTH management’s attention has been brought to a piece of news on twitter about an 18-year-old girl who was brought to LUTH by her boss on account of being raped. Our record shows that on 4th June, 2020 at about 6pm, a middle-aged woman came to the Accident and Emergency (AE) that her sales girl was reportedly raped by a dispatch rider who had come to deliver items to her shop.She said that she came to LUTH emergency so that post-exposure prophylaxis (PEP)could be administered to the young lady.At this point, the alleged victim was still in the car. The medical officer in charge of the Triage unit of the A/E unit then proceeded to discuss the case with the Senior Registrar on duty in Obstetrics and Gynaecology (O&G) section in the presence of the woman.She was informed that the PEP will be administered to the victim once she was formally registered in the hospital, while the legal aspect will be handled through an established legal process in Lagos State.The woman responded that the case was already reported to the police and that what they needed was treatment  i.e PEP.At this point, a slip for registration was written for this woman. She then enquired if registration was free and she was informed that a fee was to be paid at the cash point.She also wanted to know if the PEP was free and was told that the pharmacy will give the information regarding the drugs and any cost attached once the lady is registered.She accepted the slip and then left the O&G consulting room, while the doctors returned to their duties.It was, however, observed later that the woman did not proceed to register the rape survivor but had actually left with her without informing the doctor.The above detail describes what transpired between our staff and the woman. The victim remained inside the car throughout the encounter with the woman and none of our staff saw the victim before they both disappeared.At no point did any of our staff approach the woman to drop charges against the alleged rapist.LUTH as a hospital has a well-documented policy on handling and supporting cases of rape, and we have handled many of such cases in the past. We as an organization stand against any form of interpersonal violence and sexual assault and commit to deploying all our skill to all patients we care for including rape survivors”the statement readThe post Update: LUTH denies Twitter user’s claim that it’s staff refused to treat 18-year-old sales girl raped by dispatch rider appeared first on Linda Ikeji Blog.