The Department of the Treasury Office of Foreign Assets Control (OFAC) in a coordinated action with the U.S. Department of Justice, on Tuesday announced it had taken action against six Nigerian nationals for allegedly conducting an elaborate scheme to steal over six million dollars from vulnerable victims across the United States. The individuals designated by the State Department, targeted U.S. businesses and individuals through deceptive global threats known as business email compromise (BEC) and romance fraud. According to the State Department, American citizens lost over $6,000,000 due to these individuals’ BEC fraud schemes, in which they impersonated business executives and requested and received wire transfers from legitimate business accounts.  The department listed the accused as Richard Uzuh, Michael Olorunyomi, Alex Ogunshakin, Felix Okpoh, Nnamdi Benson, and Abiola Kayode.

According to the press release, money was also stolen from innocent Americans by romance fraud, in which the designees masqueraded as lovers to gain trust from victims.“Cybercriminals prey on vulnerable Americans and small businesses to deceive and defraud them,” said Secretary Steven T. Mnuchin. “As technological advancement increasingly offers malicious actors tools that can be used for online attacks and schemes, the United States will continue to protect and defend at-risk Americans and businesses.” 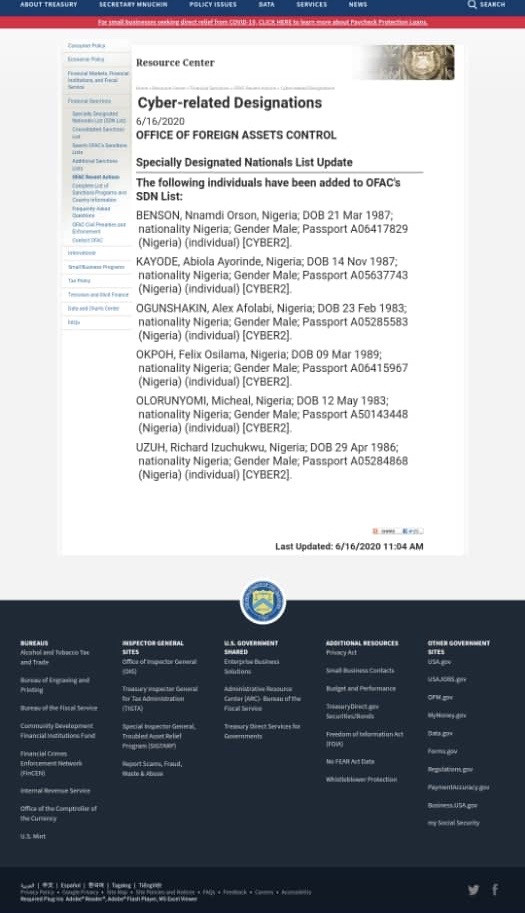 In a statement posted on the US Department of State’s official website and titled “U.S. Sanctions Nigerian Cyber Actors for Targeting U.S. Businesses and Individuals” the US dept said;”Technological advancements that provide greater interconnectivity also offer greater opportunity for exploitation by malicious actors who target at-risk Americans.” “Today, in coordination with the U.S. Department of Justice, the Department of the Treasury’s Office of Foreign Assets Control took action against six Nigerian nationals, pursuant to Executive Order 13694 as amended, for conducting an elaborate online scheme to steal more than $6 million from victims across the United States.””The six individuals designated today manipulated their victims to gain access to their sensitive information and financial resources.  The U.S. will not tolerate such gross misuse of technology.”” The United States will use all of the tools at our disposal to defend the American people and businesses from malign actors that seek to target them, including cyber-enabled actors who prey on vulnerable Americans and businesses.” The post U.S. sanctions 6 Nigerian cyber criminals for stealing $6m from U.S. businesses and individuals appeared first on Linda Ikeji Blog.