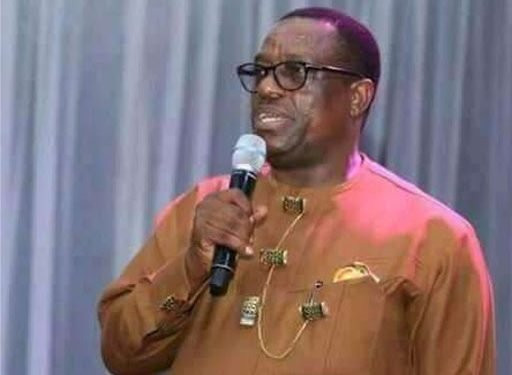 Victor Giadom, the National Secretary of the All Progressives Congress APC has declared himself the acting Chairman of the party following the ruling by the Court of Appeal Abuja which upheld the suspension of Adams Oshiomole on Tuesday, June 16.  Giadom’s announcement is coming a few hours after the National Publicity Secretary of the party, Lanre Issa-Onilu, issued a statement announcing the Deputy National Chairman (South), Senator Abiola Ajimobi as the Acting National Chairman. At a press briefing in Abuja this morning, Giadom said his action was sequel to a meeting held with other members of the National Working Committee after Tuesday’s Appeal Court ruling affirming the suspension of the substantive National Chairman, Adams Oshiomhole. According to him, a court ruling delivered on March 16 ordered he takes over from Oshiomole who was earlier suspended by a court ruling delivered on March 4. Giadom said he couldn’t assume office at the time because Oshiomole had filed an appeal.  In his words ”I bring to your notice that on the 16th of March 2020, Hon Justice S.U. Bature in suit no FCT/HC/M/6447/2020 had ordered that, with the earlier suspension of Comrade Adams Aliyu Oshiomohle, I Chief. Hon Victor Giadom should act as National Chairman of our great party,” he said.“That Order could not be immediately effected at that time because of the temporary reprieve Adams Oshiomohle got from the Court of Appeal on the same date.“However, having removed the temporary reprieve yesterday by the Court of Appeal and considering the fact that we cannot allow for a vaccum, I most humbly inform you that I have assumed office as Acting National Chairman of our great party in compliance with the order of the court.” Giadom announced the cancellation of the screening and appeal committees on Edo State Governorship election. He directed all the six aspirants to the party’s ticket for Edo State Governorship to report for fresh screening at the party Secretariat on Wednesday and Thursday. He also announced Deputy National organizing Secretary, Hon. Muhammad Sani Ibrahim as the National Organising Secretary. The post Confusion in APC as National Secretary of the party, Victor Giadom declares himself acting APC national chairman appeared first on Linda Ikeji Blog.