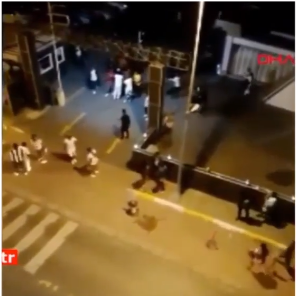 Many people were injured on Tuesday June 16, following a fight between Nigerian cultists in Avcilar, Istanbul.  The fight between Ayes and Mafians in the Turkish capital began at a nightclub around 3:30am.  DHA reported that some Nigerians involved in the fight which centered “on a girl”, have been arrested by the police.  Here is the video below;       View this post on Instagram         The fight took place on Tuesday, June 16 at a nightclub. It was further gathered that the fight between Ayes and Mafians occurred over a girl DHAA post shared by Lindaikejiblog (@lindaikejiblogofficial) on Jun 17, 2020 at 11:22am PDTThe post Many injured as Nigerian cultists clash in Turkey (video) appeared first on Linda Ikeji Blog.