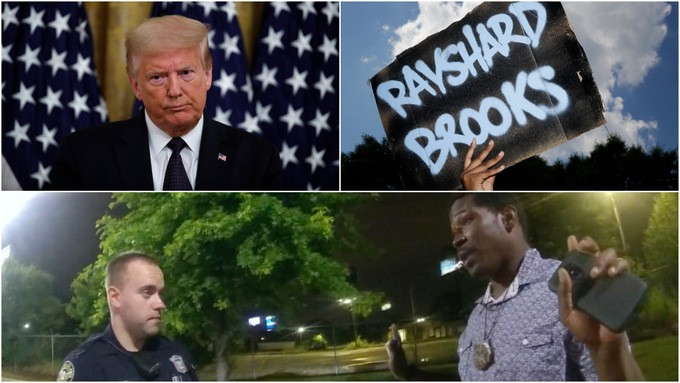 President Donald Trump has reacted to the shooting at Rayshard Brooks which led to an Atlanta police officer, Garrett Rolfe being charged with felony murder on Wednesday June 17.  Though Prosecutors said Brooks posed no threat when he was gunned down and that the white officer kicked him and offered no medical treatment as he laid dying on the ground, Trump insisted that the police has not been treated fairly as no one should “resist a police officer”.  Speaking on a Fox interview, the US President also said he heard an explanation from Rolfe’s lawyer that the officer heard a sound like a gunshot and saw a flash in front of him. He said;  “I don’t know that I would have necessarily believed that, but I will tell you, that’s a very interesting thing and maybe that’s so. They are going to have to find out. It’s up to justice right now. It’s going to be up to justice. I hope he gets a fair shake because police have not been treated fairly in our country. They have not been treated fairly.” Atlanta mayor, Keisha Lance Bottoms had said the morale in the police department was “down ten-fold” due to the charges.In an interview with CNN on Wednesday night, Bottoms said “we expect our officers will keep their commitment to our communities” amid reports that officers were calling in sick.   The post Rayshard Brooks shooting: Trump says police not being treated fairly appeared first on Linda Ikeji Blog.