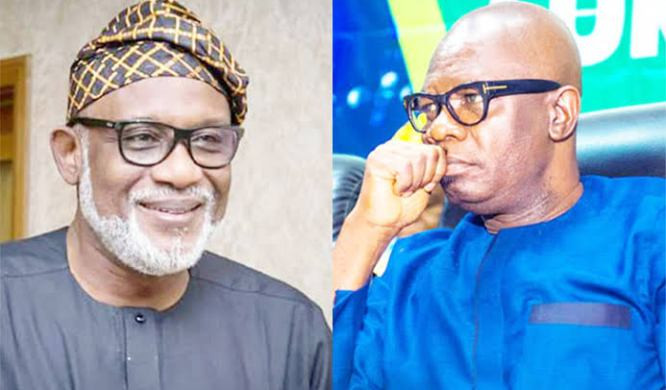 Ondo state governor Rotimi Akeredolu has distanced himself from the drama that ensued at the state house last night, between the state’s Deputy Governor Agboola Ajayi and Police Commissioner Bolaji Salami.  Governor Akeredolu’s spokesman Segun Ajiboye described claim of having a hand in the incident as “absolute falsehood”.  Ajiboye stated that the normal practice in government is for inventory of offices and residential quarters to be taken before an official leaves such premises. He accused aides of the deputy governor of wanting to leave the state house with items wrapped in unclear ownership as late as 11pm. He added that the commissioner of police came over to restore law and order at the state house.  The statement read;  “It should, however, be placed on records that it is a time-tested code in government’s business for officials to take inventory of offices and quarters before and after an official is moving in or out of offices or quarter. “Accordingly, the Commissioner of Police intervention which was at the instance of an almost manipulated security apparatus at the Government House was most desirable to restore law and order.“It becomes particularly worrisome and suspicious when aides of the Deputy Governor insisted on leaving the premises with items wrapped in unclear ownership as late as 11pm.“Governor Akeredolu reiterates his commitment to the rights of all, including the Deputy Governor governor. But he has a duty to be firm and dispassionate in exercising the roles assigned to him.”The post Governor Akeredolu denies asking the police to stop his Deputy from leaving the state house over alleged plan of dumping APC for PDP appeared first on Linda Ikeji Blog.