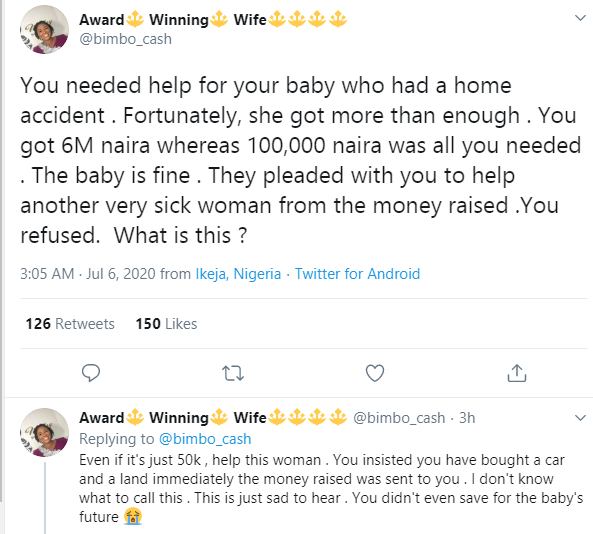 A Twitter user has called out a lady who refused to save the life another person after Nigerians contributed N6m to save her own child who needed N100k for treatment.  According to @bimbo_cash, the lady insisted that she has used the money contributed to save the life of her baby to buy a land and car, when they reached out to her to help save the life of another woman who needed to undergo a surgery.  She tweeted;  You needed help for your baby who had a home accident . Fortunately, she got more than enough . You got 6M naira whereas 100,000 naira was all you needed . The baby is fine . They pleaded with you to help another very sick woman from the money raised .You refused. What is this ?Even if it’s just 50k , help this woman . You insisted you have bought a car and a land immediately the money raised was sent to you . I don’t know what to call this . This is just sad to hear . You didn’t even save for the baby’s futureThe sick woman was discharged from the hospital due to lack of fund for her surgery. I still called you to beg you to help this woman with anything you can part with . Give back to humanity , no matter how small . I understand that the money is for the baby and raised for himIt is just morally right to give back any little you can and then open account for your baby but no , you bought car and land and you are saying the money is finished money raised from the public . I’m so sadShe said it’s God that favored her and the money is for her baby . She’s right though, that’s what she used to silence me o. It’s because the person that did fundraising was transparent and kind enough to transfer all the fund to her after leaving the hospital naShe’s adamant . Even her husband fought to share from it and was given 1M . How on Earth you finish 6M in one month? Money she wasn’t expecting before nowThe post Nigerian lady allegedly refuses to save the life of another person after Nigerians contributed N6m to save her child who needed N100k for treatment appeared first on Linda Ikeji Blog.